Like the scene in “Rudolph the Red-Nose Reindeer” when Santa realizes that the eponymous feature he and others had treated as if it were nasal leprosy actually could be really, really useful, the idea for this blog entry came in a moment of pure annoyance. 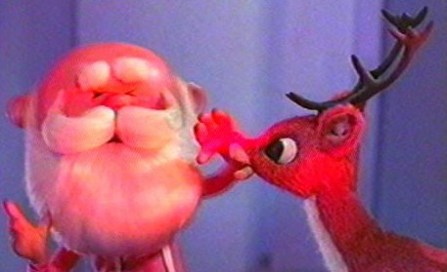 Rudolph annoys Santa into a state of creative problem solving.

I attended my daughter’s annual dance recital today. Its organizers spend months planning it and thus take it very seriously. It occurs in a high school auditorium complete with a sound and lighting crew. The studio where my daughter dances also teaches martial arts, and both disciplines come together in this performance for a mash-up of muscle flexing and elegance. It’s a terrific idea that has benefits on recital day as tutus and black belts mingle to give the program real texture.

As polished and well-executed as the show was, audience behavior descended to a new low. Despite repeated requests not to take flash photography, the theater twinkled in the dark as phone users fumbled with their devices’ camera function. Occasionally, instead of capturing video, some users accidentally played them back at levels that I’m sure could be heard backstage. Others were checking sports scores and email. In other words, we couldn’t keep our hands off the powerful portable computers in our pockets and purses at precisely the moment when etiquette and respect called for turning them off.

My experience is hardly unique. We’ve all seen bad smartphone behavior. It got me thinking: what could the recital organizers have done to reduce it? Though there is no way to completely eliminate the possibility that someone will flaunt “no cellphone allowed” rules, there are some things they can do to cut down on smartphone distractions. Here are three examples of these distractions and three mobile-friendly solutions.

Problem #1: Smartphone cameras being used in a recital hall.

Solution: Make it easy for smartphone users to order professionally-captured photos and videos via a mobile-friendly website after the curtain falls, and enforce a strict no-smartphone policy in the theater during the performance.

The most common reason why smartphone users were lighting up what should have been a darkened theater was because guests wanted to take pictures and videos of their dancers and warriors. To meet this demand next year, the organizers should set up a room just for taking photos, complete with proper lighting and background, on the day of the event. Invite families to shoot there, but also open it to a professional photographer and videographer, who then will capture every kid in every number during the show and publish the photos to a mobile-friendly website immediately after it has ended. Use bar codes to link the photos and videos to every child and performance, just as Disney does with its PhotoPass program. Then, throughout the venue, place links, QR codes and NFC tags to the website where attendees purchase a package that memorializes the event.

Why it would work: Seeing a photographer and videographer take professional photos and having immediate access to their pictures will serve as a constant reminder that we in the audience do not need to take our own. For those who still decide to do it themselves, a no-exceptions policy will result in a theater experience the way it was meant to be. It also stands to become a bigger money maker for the event organizers.

Problem #2: Smartphones on the restaurant table.

Solution: Enable guests to order their drinks and meals from their mobile devices while they wait for a table.

I feel so discouraged when I see families dining out but with their noses in their smartphones. Silent glows light the air that five years ago would have been filled with conversation. Those phones tend to disappear when the food arrives because even the most hardcore user wants to keep his phone out of his french fries. So why not cut down the amount of time it takes for the food to arrive by enabling these smartphone users to place their orders while they wait for their tables?

Why it would work: Restauranteurs already know how to manage waiting areas. Many provide guests with coaster-sized transponders that vibrate and glow when a table becomes available. It wouldn’t be hard to link the transponder to a customer’s mobile website-enabled meal order. This would decrease the likelihood that a customer would abandon her wait while increasing the number of turns the restaurant could achieve during a service. That, in turn, would result in more money for the owners, and more time eating and less idle time for customers.

Problem #3: The dude in the front row talking on his smartphone during a baseball game.

Solution: Scoreboard slide show featuring “Hall of Shame” fans who talk on their phones during the game.

I’m actually excited about what mobile can do to improve the fan experience at sporting events. I love baseball, and I’d be thrilled to have between-inning access to the official scorer. I’d appreciate knowing which concession stand has just beer, where I can get a hot pretzel, and which bathroom has the shortest lines. But I can’t stand seeing fans occupying the best seats in the stadium while yammering away on their phones. Fixing that by broadcasting these offenders on the stadium Jumbotron would shame them into putting their phones away and deter others from taking them out in the first place. In the meantime, providing useful mobile tools, such as access to stats between hitters and stadium maps, would be a sign of progress.

Organizations that work so hard to produce a memorable experience, whether it be at a dance recital, restaurant, or ballgame, owe it to themselves and their bottom lines to focus their customers on that experience as much as possible. While there is nothing anyone can do to eliminate bad behavior, these mobile-friendly solutions can go a long way to reducing it.

Categories This Blog Has Covered

This site uses Akismet to reduce spam. Learn how your comment data is processed.