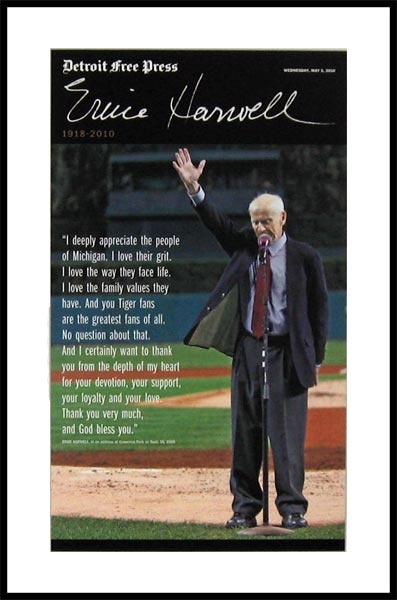 I’m going to write today about public speaking, a skill I consider essential to leadership. I’ve done quite a bit of public speaking myself, and fortunately, I’ve been coached by someone with extraordinary talents. He gave me three tips to doing it well, which I will share here. I’ll also offer a few nuggets I’ve picked up along the way.

First, let me tell you a bit about my mentor.

After having just turned 20 in the summer of 1992, I wrote a letter to Ernie Harwell, the late Hall of Fame baseball broadcaster who spent 42 of his 55 years calling games for the Detroit Tigers. At the time, I was contemplating a career in sports journalism. Growing up as I did in a suburb of Detroit, there was no higher authority on this topic than Ernie, so I asked him what advice he’d give someone like me.

One Friday night, I returned home from a Tiger game to find my entire family awake to greet me. With the sort of smile ordinarily reserved for graduations and weddings, my mother handed me a legal pad with a note that read “Ernie Harwell called. Wants you to call him back tomorrow a.m. at 7.”

Sleep that evening came about as easily as it does for many six year olds on Christmas Eve. I called the Harwell home as instructed and was greeted by Ernie’s unmistakable voice. He told me he had received my letter, but rather than write back he wondered if I could come to his house for coffee so we could talk. Of course, I accepted his invitation.

Over the course of the next three hours, we talked about his career arc, the lessons he learned, and the personalities he met along the way, including some of the game’s Olympians, guys like Ty Cobb and Babe Ruth. Though he had tailored his advice for an aspiring broadcaster, much of it has value to anyone who has to speak in front of an audience.

Here, then, is a list of tips on public speaking, including the three that Ernie taught me.

If you’re an ambitious marketer, you’re going to need to excel on stage to advance your career. I’ve found that following these tips has helped me improve my skills. What has worked for you?

Tags: ernie harwell, how to be a better public speaker, how to speak in public, making speeches, marketing, public speaking, speeches

Categories This Blog Has Covered

This site uses Akismet to reduce spam. Learn how your comment data is processed.